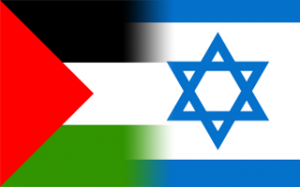 I suspect it’s due to widespread mis-understandings and lobbying. I’ve created a White House petition, please sign it, it reads:

Support a single, secular state in Israel-Palestine with equal rights for all.

The Israel-Palestine “peace process” has been underway for over 40 years. Two generations of Palestinians and Israelis have come of age amid violence, occupation and still-born “peace summits”.

The ancient Mediterranean culture of Palestine and the followers of Judaism must find a way to inhabit the country they hold dear through dialogue as equals.

Palestinians and Israelis deserve equal rights in their native land. They deserve security, the right to live where they choose and freedom from fear.

This will come when they live together in peace and heal their wounds. When occupation, unequal laws, violence against civilians and political imprisonment ends.

As a secular, multi-cultural nation, the USA should not support any plan of partition along religious lines.

If you’re not convinced this is a good idea or necessary, do read and listen to the following writers. They convey the need and urgency for a single state solution more eloquently than I’ll ever be able to:

If you still want to know what I think…

The fact is that Israel-Palestine today is one state and has been for 47 years. It has one army and one government.  It is a state where fully half the population is disenfranchised and has limited or no rights.

The “two-state peace process” does not serve the interests, or secure a positive future for Israelis and Palestinians. All it does is fuel the careers of the consultants who are in the “peace process industry”. They’ve been milking this rich cow for almost 50 years, and would be happy to milk it for another 50.

Partition of Palestine was never a good idea. How did it make sense to give over half the country of Palestine to the Jewish population when they were less than a quarter of the population? What right did the Allied Powers, the UN have to do this? They took away the people’s right to determine their own future. This is why a Palestinian Muslim or Christian who was born in Haifa or Jaffa cannot return. It is an injustice.

Today, Palestinians within Israel number almost 6 million, they’re half the population. The two state “solutions” being discussed would leave them with less than 20% of the country. And that number is falling every day since Israeli state has been illegally building settlements in the West Bank for 50 years.

I have some experience with partitions. In 1947, the country I was born in (India) was partitioned (by an Allied power). My father is from Punjab, a state that had a roughly equal Muslim, Sikh and Hindu population. Each half of Punjab was ethnically cleansed and a culture centuries old torn apart.  Incidentally, the Roma/Gypsies are from this part of India and look remarkably like my family, so there’s the Holocaust connection.

The same thing happened in Israel-Palestine, though the Palestinians bore the brunt of the suffering there and still are.

India is a secular democracy with many, many minorities. They are linguistic, religious, caste based, regional. You name it, we have a minority for it (including 150 million Muslims)[1].  Pakistan was meant to be a refuge for united India’s muslims.

Of course, once you’ve asked whether everyone’ Muslim, the next question is whether everyone is the right kind of Muslim. So today, in Pakistan, which was meant to protect India’s Muslim minority, Sunnis are murdering Shia and blowing up Sufi shrines.

The same thing eventually happens to any country built along religious lines. So a “Jewish State” of Israel can look forward to divisions between Ashkenazi and Mizrahi, between Orthodox and Reform, between North African Jews and Arabian peninsula Jews. That is just human nature.

This is why the country I chose as my home (USA) and thankfully, the country I was born in (India) are secular democracies. This is why it is critical to separate church from state to ensure the rights and primacy of the individual.

The only right position to have is that faith is a personal matter. The state has no role to play in it. The moment you deviate, both your religion and your state will be captured by power-hungry charlatans who want to use these powerful tools for their own ends.

In the end, I support a one state solution because I want everyone to live in a country like the USA, where all people equal under the law (though we too are still perfecting the union).