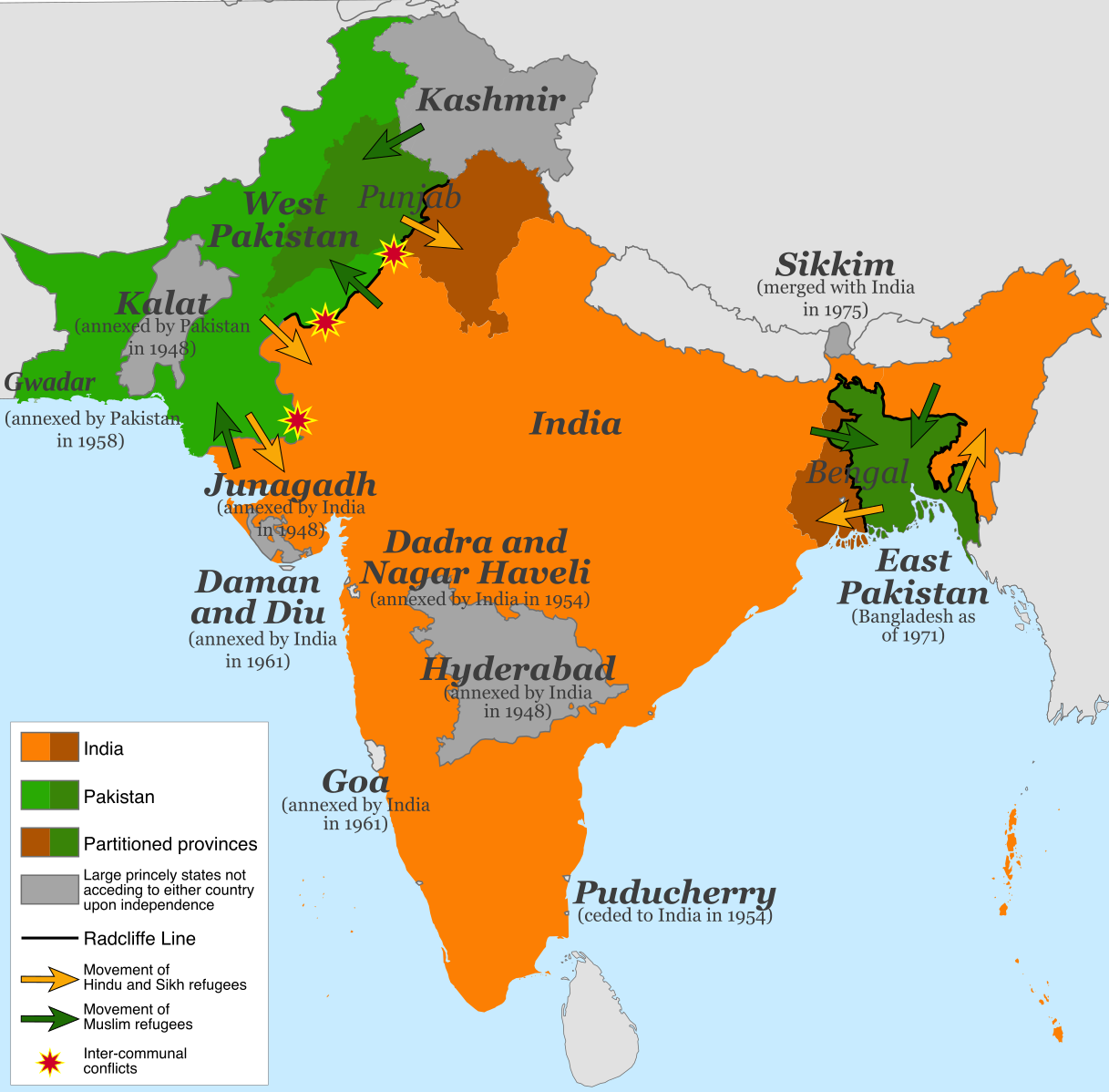 70 years ago today, the British government, exhausted by the second World War retreated from its largest colony, India. In doing so, the British Empire finally acquiesced to the right of the sub-continent’s peoples to determine their own political fate.

The first, halting steps towards devolution of power were made in response to enormous Indian military and materiel contributions during World War I. It took decades of violent rebellion, non-violent protest and eventually, the cost of the second World War to loosen the British grip on India. After all that, in mid-August 1947, two new nations, India and Pakistan were created. Suddenly, almost 400 million people were free. Decolonization in India eventually led to the collapse of all European colonies across Asia and Africa.

There were a multitude of reasons that the Indian independence movement had split along religious lines and led to demands for two separate nations. But chief among them was identity. As with most places, the people of the sub-continent find their identities in ethnicity, language, culture, politics and yes religion as well.

It was religion and a fear of subordination that divided United India in two. Pakistan for the Muslim majority regions, and India for the Hindu majority regions. Later, in the 20th century, the two geographically separate halves of Pakistan split along ethnic and linguistic lines. East Pakistan became Bangladesh, with some help from the Indian army and much resistance from West Pakistani forces.

The primary Pakistani and Indian leaders at independence almost without exception failed to understand the ramifications of the ethno-religious-nationalism they had set in motion with partition. The New York Times has published two essays to mark the 70th anniversary of Indian and Pakistani independence, both worth reading. Pankaj Mishra’s India at 70, and the Passing of Another Illusion discusses how India’s political establishment has failed to live up to the democratic ideals expressed at independence. Abbas Nasir’s How Pakistan Abandoned Jinnah’s Ideals give the Pakistani elite the same treatment.

On August 14th, 1947, when Pakistan became independent of the British Empire, it’s precise borders were unknown. On August 15th, 1947, when India became independent, it’s borders were uncertain. For tens of millions of people in Punjab, Sindh and Bengal, the celebrations were colored by a deep uncertainty. Would their homes end up on the “wrong” side of the border, and would they be forced to flee?

Not till August 16th, 1947 was the Radcliffe line defining the borders between India and Pakistan disclosed to representatives of the two new nations. It was published on the 17th. Cyril Radcliffe, an British lawyer with no previous Indian experience was given five weeks to consult with the Boundary Commission and determine the borders based on Muslim, Sikh and Hindu majorities in different areas. Radcliffe left the country before the results were published and reportedly refused payment for the service.

As soon as the Radcliffe line was made public, a great migration was set in motion. Eventually, 15 million people would migrate under panicked circumstances, from homes within India to Pakistan and vice-versa. Over 11 million of those migrations would be in Punjab and Sindh, the vast province in the north-west. Within a few months, a society and culture that had evolved over centuries shattered along communal lines.

Sporadic violence, which had begun prior to independence, spiraled out of control as the ramifications of partition became clear to individuals and communities. Neither the British colonial authorities nor the newly constituted Indian and Pakistani governments were prepared for what ensued. As people left villages and towns that had been home to their families for centuries, theft and extortion grew rampant. Killings were followed by reprisals, rape and abduction by more abduction and rape.

The magnitude and scale of the panicked migration and the violence that ensued is difficult to comprehend. The ferocity and intimacy of the pogroms has few comparisons in history. In many places, neighbors murdered and preyed on people they had known for generations.

In villages where not much had changed for centuries, the migration and blood-letting erased a third or more of their population within a matter of days. Virtually every part of Punjab and Sindh suddenly lost the human element of half their culture.

Across what once was a United Punjab, in thousands of towns and villages, lie the crumbling ruins of unattended temples, mosques and gurudwaras. The people who worshipped there spirited away to the other side of the border, or killed in their homes or along the way.

Not all these abandoned places of worship are neglected. Some are tended by an aging man or woman who does not pray to this particular god. They tend to these physical spaces in the memory of a childhood friend or neighbor. It is, a higher, more human form of devotion.

During the First and Second World Wars, the civilian population of India was rarely threatened directly. The German light cruiser Emden did bombard Madras in World War I.  In World War II, the Japanese advance (aided by Bose’s INA) was stopped decisively in Kohima, though Andaman and Nicobar were occupied. The butchery of civilians that was a feature of WW-II in both Asia and Europe did not reach United India. Nevertheless, India did not remain unaffected. 2 million civilians starved to death during the Bengal famine, many in the streets of Calcutta, within sight of colonial bureaucrats who could have alleviated their suffering. This indifference reached the very top of the British government.

For most Indians and many Pakistanis, the independence celebrations on August 14th and 15th remain joyful celebrations. As the 19th and 20th centuries progressed, British rule was increasingly seen as onerous, capricious and unnatural. At Jalianwala Bagh in Amritsar, while hundreds of thousands of Indian sepoys fought across Europe and the Middle-East under the British banner, Indian Army troops were ordered by their British officer to fire on unarmed protesters. A thousand people were killed. That attack on an peaceful gathering led even the most Anglophile of Indians to question continued British presence in India.

The population of United India was just under 400 million on the eve of partition. A small fraction of the population, less than 5%, was forced to migrate. Most Muslim populations across North and South India, far from the borders stayed in place. The migrations were largely restricted to Bengal and the states along the Indus river, Punjab, Sindh and Kashmir.

The Washington Post has an article on the horrors of Partition with oral histories.

This diary’s title is taken from one of those histories:

Even the fruit on the trees tasted of blood, recalls Sudershana Kumari, who fled from her home town in Pakistan to India. “When you broke a branch, red would come out,” she said, painting an image of how much blood had soaked the soil in India.

The New York Times also asked readers to contribute oral histories. There are millions of such stories.

Several artists have mined the trauma of partition for material, producing books, short stories and movies.

Mohinder Sarna’s short stories on partition are now available in English, a collection titled Savage Harvest. They cannot be recommended highly enough. Intizar Hussein wrote extensively on partition, including in the novel Basti. Jyotirmoyee Devi’s novella Epar Ganga, Opar Ganga was translated into English as The River Churning. Numerous authors approached the vicious violence of partition from a distance, discussing it in the abstract or from a child’s perspective. Bapsi Sidhwa’s novels, especially Ice-Candy Man (later re-titled Cracking India) is a great example. Khuswant Singh’s Train to Pakistan is unflinchingly different in that respect. Saadat Hassan Manto’s short stories are generally superb, and several deal with the partition, Toba Tek Singh is the most widely known. Naseem Hijazi’s Khaak aur Khoon is only available in Urdu, but Anis Kidwai’s memoir, In Freedom’s Shade, has been translated into English. Bhisham Sahni’s Tamas is also accesible in English. More recently, Anuradha Roy’s novel An Atlas of Impossible Longing is set across several decades, including the 1940s. Amit Majmudar’s Partitions narrates the story of three children and an old man trying to travel to safety. And of course, there is Salman Rushdie’s Midnight’s Children.

When it comes to movies, Garam Hawa is considered the classic. Shyam Benegal’s Mammo is probably a close second. Khamosh Pani is intense and moving. Kartar Singh was one of the earliest movies on the partition, and featured Amrita Pritam’s poem Aaj Aakhan Waris Shah Nun. The later Bollywood movie Pinjar included the poem too, it is probably the most widely known poe on partition. Khushwant Singh’s Train to Pakistan was turned into a movie, as was Sahni’s Tamas. The sprawling TV series Buniyaad aired in the 1980s and continues to find an audience.

Since the violence largely impacted Punjab, Punjabi (on both sides of the current border) authors are over-represented. It is the primary historical topic in Punjabi literature of the 20th century.

When it comes to non-fiction, Collins and Lapierre’s Freedom at Midnight is an accessible and dramatic retelling of partition. I read it as a teenager and I still recall my initial shock at the scale and scope of the violence. In most families, the trauma of partition was not openly discussed. Several non-fiction works have focused on the partition including Yasmin Khan’s The Great Partition: The Making of India and Pakistan. Urvashi Butalia’s The Other Side of Silence: Voices from the Partition of India relates interviews with a number of people who lived through 1947. Nisid Hajari’s Midnight’s Furies: The Deadly Legacy of India’s Partition recounts the events with a reporter’s viewpoint.