The WSJ reported today on the surveillance infrastructure Iran has deployed over the last year and it explains why Iranians have been complaining about the speed of Internet access. It seems likely that the regime is monitoring (quite comprehensively) the activities of all Iranians. Since the internal network is controlled by the regime, it may be possible for them to identify protesters who are posting information online. This makes it extremely important that the protesters are successful in having the election re-run. If the current administration stays in place, they will most likely resort to a bloody purge, similar to ones in 1989 and 1999, killing another generation of reformist leaders. Ayatollah Montazeri’s fear that “People in the world are getting the idea that our business in Iran is just murdering people” will be realized in horrific fashion.

Meanwhile, the Guardian Council admitted that up to 3 million votes cast may be questionable, at the same time they claim this could not have affected the outcome (it’s 9% of the vote). It seems to me that the Guardian Council (all of whom are directly or indirectly appointed by Khamenei) are trying to reduce the appearance of lying through their teeth, but still trying to avoid another election. NYT’s The Lede blog has an analysis of the vote from a more disinterested organization.

Of course, the story of the day is a video of a young woman being shot in a melee. The videos are online, I’m not going to link to them, some news outlets are identifying her as Neda Soltan. A number of people as young as her have been killed, most likely by security forces using deadly force against largely peaceful protesters as a means of intimidation. Roger Cohen writes in today’s NYT about why these killings are a bad idea for the regime, given the importance of martyrdom in Shia history.

I’ve been following the Iranian election and ensuing protests with immense interest over the past few days. Through it all, I’ve been wondering what has been going on in Qom, amongst the clerics who wield immense authority. As I dug around, one name stood out was that of Ayatollah Montazeri, who made a statement earlier in the week that he considered the election results highly questionable.

I knew next to nothing about him, but a little bit of digging around suggests Montazeri is among the more intriguing clerics in Iran, and may be more liberal than I personally would have expected an Iranian ayatollah to be. Reading about him has forced me to acknowledge that I prejudged some of the participants. What has also struck me as I’ve read more about the clerical system in Iran is its discursive aspect, and how much authority Montazeri appears to have, apparently only because of his ideas. He has been at odds with the regime for years, but it seems to me that questions about his religious authority just wither away, and he remains resilient. There is a must-read article from the new York Times in 1989.

I’ve always felt that Iran was special in the Middle Eastern context because of the age, strength, beauty and resilience of its culture. I now think my feelings have been more right than I thought.

Ayatollah Montazeri was Khomenei’s designated successor till he was forced to resign in 1989. After his release from house arrest in 2003, he was quite outspoken about the injustice of a repressive regime. From all accounts he is a highly respected cleric, committed to change from within. I particularly liked this quote, he advised his listeners as “brothers and sisters to seek knowledge and don’t chant slogans about it.”

His political thinking has evolved over time, there is a remarkable BBC interview with various clerics where he spoke of how the execution of a 13 year-old girl was the catalyst for his split from the more hard-line elements. Particularly striking is his early criticism of the harsh treatment and arbitrary executions of critics. The current uproar may have made for strange bedfellows, since Montazeri seems to have come into conflict with Rafsanjani in 1987 over the Iran-Contra affair. In each episode I’ve read about, it seems Montazeri has been on the side of reflection and thoughtful action, and his opponents in the regime have been focused on creating and retaining power. He’s been a thorn in the side of the regime for a while, and they have gone so far as to make veiled accusations of treason against him in 1997. He has survived earlier, dramatic purges, and in 2007 he went so far as to question the confrontational manner in which the regime was pursuing its nuclear ambitions. I think the wikipedia article on him is required reading.

There was some question about what role the army may end up playing in all of this.  My sense is that there has been a bit of a purge in the revolutionary guards, older, moderate officers have been pushed out and those loyal to Ahmedinejad promoted.  It also seems like the Basij paramilitary has been strengthened, and made a vehicle for patronage by being given valuable franchises (including large construction contracts). Similar to the state of affairs in China, where certain enterprises are run by the army.

The patronage is coupled with something like selective economic warfare.  If you inflate the economy, and then increase salaries for those loyal to you, you will impoverish your opponents and weaken them. Your opponents economic resources are weakened without your having to resort to something as crass as wholesale confiscation of their property.  I’ve begun to think Ahmedinejad may be a lot more cunning than he is given credit for, and I don’t believe Khamenei is entirely in control. The army is a wild card, but some of the moderate forces have led the RG in the past and may still have friends there.

Another wild-card could very easily be the religious establishment.  Their relationship with Khamenei may be less than collegial, apparently there has been some questioning of Khamenei’s religious training.  If a group of influential clerics were to speak in favor of a run-off election, or against the repressive actions of the regime on Friday, that would have a huge impact.

To continue the realpolitik theme, I keep hearing from friends that these protests will die when they are ruthlessly crushed by the military and para-military forces firmly controlled by the Iranian regime through a system of patronage. This risk definitely exists, but the most anyone can do is follow their conscience and do the right thing. This is the first popular movement in a repressive regime to be documented via social networks. That makes a difference, just like the letter-writing campaigns pioneered by the folks at Amnesty International made a difference. We also should not doubt the power of non-violent protest and the moral authority it confers.

There are a few things about this protest that may make it stronger than it appears:

These are all good reasons the movement in Iran may be more successful than the nay-sayers fear. But even if it isn’t, the real question is who stands in the right, and whether we, as bystanders should recognize the abuse of power for what it is.

We must hope for the best, there is no courage to be found in despair, and the people of Iran will need all the courage they can muster to see a restoration of their right to freely elect leaders of their choosing. 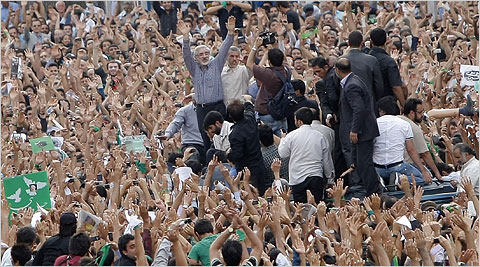 There is a certain portion of the political and media class who are occasionally so infatuated with their own sense realpolitik that they forget basic truths.

What has happened in Iran over the past few weeks is startling. An largely apathetic and cynical electorate re-engaged with politics when two things happened. The hand-picked presidential candidates had a series of sharply contested, substantive debates on television and a large number of young Iranians actively worked on campaigns.

There was a record turn-out, with over 85% participation in the vote. People stood for hours in lines because they thought their votes mattered and the issues at stake were important. Whatever we think of the various contenders and the amount of daylight between their positions, we must not lose sight of the fact that people thought their votes mattered and expect them to be counted.

As independent observers who believe that the state’s authority depends on the consent of the governed, we must stand with the electorate and their expectation that the voting process is fair and transparent. As things stand today, it is clear the vote and the counting of ballots was neither.

The Ministry of the Interior is responsible for administering elections in Iran and there were a number of problems with the vote itself. Many polling locations were short of ballots, opposition candidate supporters were denied credentials to observe balloting, communication media are being jammedand opposition campaigns were disrupted by security forces on election day. There is a strong possibility the ballot counting process was subverted. The results were announced very quickly, the results do not conform with polls taken earlier in the week, the entire state apparatus was brought to bear on the opposition to deny them an opportunity to protest. On a more basic level, you do not see 85% turnouts and high levels of interest when people are happy with the status-quot. You see high turnouts when the electorate wants change.

Despite intimidation by paramilitary forces loyal to the current regime, Iranian citizens have taken to the streets in protest. We must stand with them on the side of fair and transparent elections. It is condescending and hypocritical to suggest that a subversion of elections is acceptable to maintain civil order. The error lies with the regime and its attempt to deny the people their right to a free and fair election. The people are not in error to demand their right under the Iranian constitution to a free and fair election.

Commentators who suggest tampering with election results is acceptable seem to have forgotten that long-term stability and civil order exist only when the people know they have a say in their own destiny. It is relatively easy to imagine what will happen unless there is an investigation and the Iranian population concurs that the result is fair. A certain portion of the population will be radicalized and take up armed protest, a far larger portion will return to their former apathy. This scenario is not in anyone’s interest except the current regime’s coterie and is certainly not in Iran’s long-term interest.