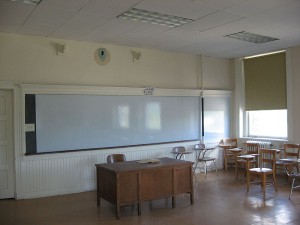 A staple of American journalism and political commentary is the sorry state of American public schools. The standard refrain one hears is that American public schools are failing their students. Schools are either too crowded, teaching standards poor, schools districts operated for the benefit of teachers and administrators, or that the entire system is just plain dysfunctional. If you follow the standard narrative, all the faults lie with the public school system. Yet, much of the blame for poor academic performance must be placed on our broader society and factors outside the control of our schools. What if we changed the standard refrain and said instead American students are failing school?

If you think American public schools are failing their students, all your remedies will focus on schools and teachers. If, on the other hand, you say American students are failing school, we may begin to look for another set of remedies, in the home. These might include setting higher expectations for student academic achievement, perhaps even raising the expectations we have of their families.

I should start off by saying that I have no first hand experience with public schools in America. I graduated from a high school in Bombay, and entered the American educational system as a college student. Virtually everything I’ve learned about the schools has been as an outsider. I don’t have children yet, so I haven’t had to deal with the schools from a parent’s perspective. But there are some stark differences I see when I compare and contrast my own education with what I’ve gleaned about the American public school system.

I wouldn’t hold my school or the Indian system of education out as the perfect model model. It has many faults, and one glaring one, the relentless emphasis on rote learning, made me (and many others) opt out of it when it came time to attend college. The public school system in India is also prone to the same corruption that riddles most state institutions. Yet, I can’t deny that the rigid, unforgiving curriculum and its emphasis on tests virtually ensured that we knew how to read, write and had acquired a basic understanding of science and mathematics. It wasn’t very good at encouraging critical thinking, but we did acquire the fundamental skills and knowledge required for further academic success. The rote learning also gave us some facts and figures on which we could practice any critical thinking skills we were lucky enough to acquire.

Expanding class sizes are often cited as as a problem for US schools. Yet classes tend to be a lot smaller in most American public schools than I was used to, or those in most Asian schools. All my classes from second grade onwards had at least thirty children in them, and we had forty students to one teacher in each class by fifth grade. Yet classes were relatively strife free and efficient, largely because the burden to learn and retain material was firmly on us, never on the teachers.

Brute force and repetition was, and is, in large part the answer to everything in Asian schools. If you didn’t understand a concept, you worked on yet another group of practice problem sets, till eventually you understood the pattern. The expectation was for hard work from the student, not creative presentation from the teacher, on learning, not teaching. I can’t recall ever thinking it was a teacher’s responsibility to make the material interesting enough for us to learn. It was my job to understand and retain it. We certainly complained about the dull textbooks, and I would definitely have liked to pin the blame for academic under-performance on a teacher or two, but I’d have been laughed out of town for trying that.

No doubt, we had teachers who inspired us, and others who didn’t. Our Hindi Literature teacher, for instance, has a popular fan page on Facebook, populated by students who remember his classes fondly from 20 years ago. I can still recall his passionate lectures vividly, and many of us looked at Hindi Literature differently after his class. Few of us though, have continued to read Hindi literature, he was fighting a losing battle against an urban culture in Bombay which aspired to speak English, and a wider culture that valued hard sciences above anything as impractical as literature. The broader culture won out despite his best efforts. Which is where I’ll start next week.

Frank Rich writes in the NYT about the tea-party and the Glenn Beck inspired rage sweeping town-halls and the president’s address to congress.

David Brooks and Bob Herbert both have articles in the NYT about the role race is playing in the health-care debate.  Each of them reaches a completely different conclusion.

On this occasion I find myself leaning towards Herbert.  I don’t think every person who opposes Obama’s health care proposal, or Obama himself is racist, but I do think the fringe has been allowed to move closer to the center of power and the Republican party platform.  Ever since Nixon’s Southern strategy, the republican party has consciously exploited and encouraged racial anxiety amongst white Americans (of course, Southern democrats did the same thing quite well prior to LBJ).

Thomas Friedman has an article in the NYT today about how the absence of a cohesive policy towards solar power in the US has impacted the pace of adoption and investment.

Roger Cohen writes in the NYT today on the view from France about our debate on Health Care.

Benjamin Schrier writes in San Francisco magazine about the impact Asian-Indian immigrants have had on Silicon Valley, how the downturn and US immigration rules are affecting younger immigrant technology workers, and what this may mean for Silicon Valley’s long-term prospects. One of the men profiled in the article is the brother of a high-school friend, and I can relate to much of the article. I stayed with my first US employer for far longer than I would have if a work-visa were not a concern.

David Goldhill has a poignant and compelling article in the Atlantic Monthly titled How American Health Care Killed My Father about health-care reform. It deserves reading in it’s entirety.

The potential outcome Goldhill proposes is very similar to that advanced in John Mackey’s Op-Ed in the WSJ, except it’s more convincing, not nearly as strident, and doesn’t have an antagonistic title. Job better done.

There’s also an article that might get lost in the shuffle, but should not since it is a significant comment on the current debate on health-care reform. The US lags behind most developed countries on measures of public health and the cost-effectiveness of health-care delivered. One area, though, in which the US system leads others is in treating cancer. This is in large part due to cancer research funding from the federal government, i.e. government intervention in health-care. The American Cancer Society published a tribute to Kennedy lauding his work as a supporter of research on cancer.

This reminds me of the role Al Gore played in the Senate when the Internet and networked technologies were in their infancy, a role acknowledged by true Internet pioneers. Sometimes, a senator’s pet project can be a visionary success. Often, it’s a bridge to nowhere.