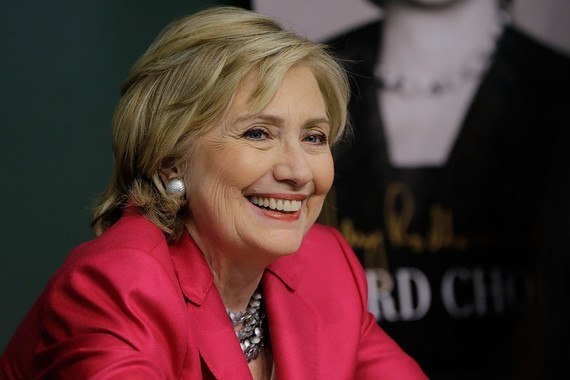 Jonathan Allen covered the White House and the 2016 campaign for Bloomberg News. Amie Parnes is the White House correspondent for The Hill. In 2015, they published a book titled HRC: State Secrets and the Rebirth of Hillary Clinton.

Allen and Parnes covered the Clinton campaign starting in 2014, planning to write another book about it. In their introduction, they explain that they thought they’d be writing about the election of a woman for the first time as President. Instead, they, like most of us, were shocked and now we have a book that chronicles infighting, mistakes and strategic errors. It’s: Shattered: Inside Hillary Clinton’s Doomed Campaign

It’s getting a lot of press. Matt Taibi in Rolling Stone is unforgiving:

Allen and Parnes here quoted a Clinton aide who jokingly summed up Clinton’s real motivation: “I would have had a reason for running,” one of her top aides said, “or I wouldn’t have run.”

The beleaguered Clinton staff spent the better part of two years trying to roll this insane tautology – “I have a reason for running because no one runs without a reason” – into the White House. It was a Beltway take on the classic Descartes formulation: “I seek re-election, therefore I am… seeking re-election.”

Even if you detest Taibi, which doubtless many here do, it’s worth paying attention to one of his conclusions:

The real protagonist of this book is a Washington political establishment that has lost the ability to explain itself or its motives to people outside the Beltway.

Ron Elving over at NPR reviewed the book more sympathetically:

‘Shattered’ Picks Through The Broken Pieces Of Hillary Clinton’s Dream

There is no Big Reveal, no shocking secret answer. Instead we get a slow-building case against the concept and execution of the Clinton campaign, with plenty of fault falling squarely on the candidate herself.

Far from a juggernaut, the campaign we see in these pages is plagued with division, unease and anxiety practically from the outset. When things go right, it only means they are soon to go terribly wrong. Win a primary, lose a caucus. Quash a rumor, see three more go viral. Close one wound and find another torn open again. […]

The Clinton we see here seems uniquely qualified for the highest office and yet acutely ill-suited to winning it. Something about her nature, at its best and its worst, continually inhibits her. Her struggle to escape her caricature only contributes to it.

Business Insider has a round-up of staffers who are challenging the depiction of infighting in the campaign. Politico is reporting the same. The NY Times review and the book discuss Clinton’s own puzzlement at why white working-class voters, who were loyal to her in 2008 weren’t on board this time around. The WaPo review focuses on the description of election night, when Obama called Hillary urging her to concede and not drag it out.

Basically, everyone’s talking about it.

I’ll chime in with my own view and then leave it to comments. I still haven’t finished the book, which seems a bit gossipy to me. But I followed along during the campaign to know the arc.

My own take is that some of the mistakes being chronicled are overblown. Presidential campaigns are insanely fast-moving affairs where inevitably, mistakes are made and bad news comes out. Enormous teams are put together at short notice, and sometimes they fuck up. People have personality conflicts and everyone’s working in a pressure cooker, the stakes are high, tempers flare, and dog-eat-dog inclinations are indulged by some. The Trump campaign was a master class of ineptitude, infighting, scandal, distaste and overall disaster.

Basically, I don’t think campaign mis-steps made the difference. In the end, I think the crucial difference was that this was an anti-establishment cycle (in terms of the Beltway establishment) and it was going to be an uphill fight for someone like Hillary Clinton. Some missteps made much earlier snowballed. High level aides okayed the paid speeches and private e-mail server, for reasons that seemed very reasonable when the decisions were made, but then turned into a nightmare when the anti-establishment climate reified. There was likely some foreign meddling, and a candidate on the other side who did his best to outflank Clinton by running as a (fake) populist. Clinton’s natural inclination towards moderation and the center, which should have been a strength, became a weakness, and the industrial mid-west was torn away. It was probably a mistake to not show up in Michigan and Wisconsin, but Pennsylvania was lost though resources were poured into it.

Personally, I regret Hillary Clinton’s loss. I thought she was the most prepared and competent candidate in 2008. I thought much the same in 2016, with several reservations. The Trump administration’s vindictive meanness and ineptitude should shut up all the people who said there was no difference between the candidates.

After all that though, the question we’re left with is why it was so close.

The blame for that cannot be placed on Hillary Clinton’s shoulders alone. Or indeed on her campaign, which was effective on many traditional measures. In a very real sense, this election was a bipartisan indictment of Washington by voters. Yes, not the majority, but we are all adults and knew what the electoral college was going into this.

In my view, to win in the future we have to focus more on local/state level politics rather than the Presidency exclusively. Income inequality is the biggest issue in this country, we have to address it head on, without reservation and our messaging should reflect that. It is actually where the fight is, though they try to hide it, the Republican objective is to maintain the current gross levels of income inequality. We have to show people we are not going to stand for that.